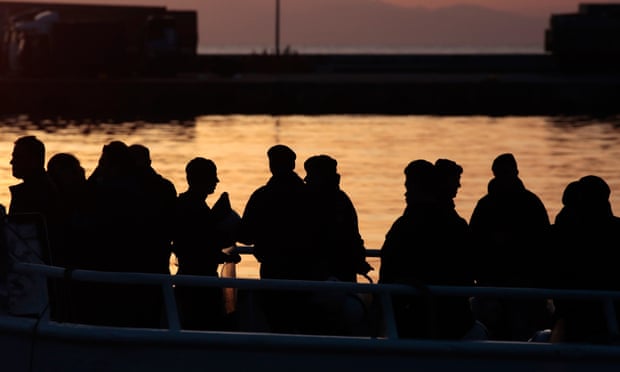 Frontex police escort migrants, who are being deported from Lesbos, on to a ferry before it returns to Turkey. Photograph: Milos Bicanski/Getty Images

The EU’s border force has warned that terrorists may have infiltrated Europe by hiding among asylum seekers, noting that two of the bombers in last November’s Paris attacks arrived on the continent in a smuggling boat from Turkey.

Frontex’s annual risk analysis, released on Tuesday, said: “The Paris attacks in November 2015 clearly demonstrated that irregular migratory flows could be used by terrorists to enter the EU.”

Echoing observations made five months ago, the report added: “Two of the terrorists involved in the attacks had previously irregularly entered through Leros and had been registered by the Greek authorities. They presented fraudulent Syrian documents to speed up their registration process.

“As the vast majority of migrants arrive undocumented, screening activities are essential to properly verify their declaration of nationality.”

Frontex’s suggestions come weeks after European politicians introduced a stringent new border policy that will see almost all asylum seekers landing on islands such as Leros returned to Turkey.