News: Greece on brink of chaos as refugees riot over forced return to Turkey

News from The Guardian (UK): 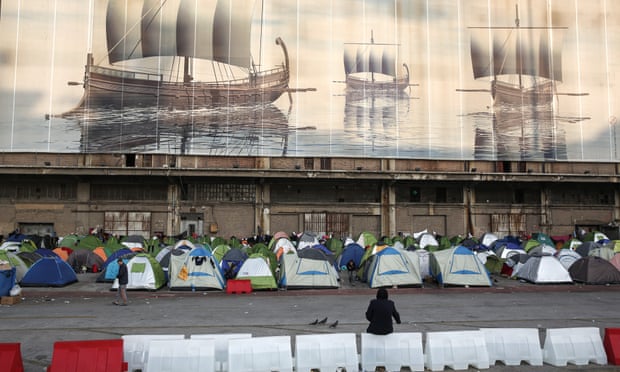 A woman feeds pigeons at the port of Piraeus near Athens where migrants are camped out. Photograph: Yorgos Karahalis/AP Image Copyright: Guardian and Associated Press.

The Greek government is bracing itself for violence ahead of the European Union implementing a landmark deal that, from Monday, will see Syrian refugees and migrants being deported back to Turkey en masse.

Rioting and rebellion by thousands of entrapped refugees across Greece has triggered mounting fears in Athens over the practicality of enforcing an agreement already marred by growing concerns over its legality. Islands have become flashpoints, with as many as 800 people breaking out of a detention centre on Chios on Friday.

Some 750 migrants are set to be sent back between Monday and Wednesday from the island of Lesbos to the Turkish port of Dikili.

“We are expecting violence. People in despair tend to be violent,” the leftist-led government’s migration spokesman, Giorgos Kyritsis, told the Observer. “The whole philosophy of the deal is to deter human trafficking [into Europe] from the Turkish coast, but it is going to be difficult and we are trying to use a soft approach. These are people have fled war. They are not criminals.”

Barely 24 hours ahead of the pact coming into force, it emerged that Frontex, the EU border agency, had not dispatched the appropriate personnel to oversee the operation. Eight Frontex boats will transport men, women and children, who are detained on Greek islands and have been selected for deportation, back across the Aegean following fast-track asylum hearings. But of the 2,300 officials the EU has promised to send Greece only 200 have so far arrived, Kyritsis admitted.

Read Full Article: Greece on brink of chaos as refugees riot over forced return to Turkey.

This entry was posted in News and tagged deportation, Greece, Guardian, news, Turkey. Bookmark the permalink.