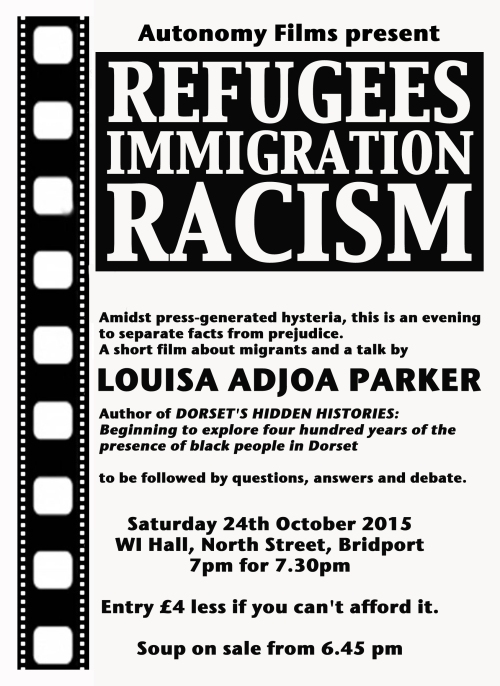 A short film about migrants and a talk by Louisa Adjoa Parker Author of ‘Dorset’s Hidden Histories: Beginning to explore four hundred years of the presence of black people in Dorset.’ To be followed by question and answer, and discussion.
7pm for 7.30pm WI Hall, North Street, Bridport Entry £4, less if you can’t afford it Soup on sale from 6.45 pm.

EVENTS ORGANISED BY OTHERS

Thursday 22nd October 2015
ROBB JOHNSON brings the award winning GENTLE MEN to the Justice Cafe. Songs inspired by the experiences of his two grandfathers in WW1.
Doors open 8 pm for 8.30…

News Article: Migrant crisis confusion: how many are entering the EU?

Migrant crisis confusion: how many are entering the EU?

Europe’s border agency is facing criticism, after admitting that it has doubled-counted migrants entering the EU this year.

It released data claiming 710,000 migrants had entered the bloc from January-September this year.

But it later admitted some migrants would have been counted coming in twice, at the Greek border and then again as they travelled north into Hungary or Croatia.

Nando Sigona, a researcher on migration at the University of Birmingham in England, said: “I’m still amazed how Frontex could release such sensitive figures so light-heartedly, considering the impact that numbers have on the moral panic regarding migration and the political debate.”

A spokeswoman for Frontex told euronews that the agency had admitted that it had double-counted a few hours after releasing the information on Tuesday (October 13).

“We did issue a clarification,” she said. “We just use the data provided to us by the member states.”

The spokeswoman added that the agency had published the number of migrants entering Hungary because it was the only way of capturing people from the Balkans, such as Kosovo, who were moving northwards to enter the EU.

Asked about whether the agency should have published an article with a headline claiming 710,000 had entered the EU, the spokeswoman said Frontex would continue to publish the data in the same way, alongside a clarification about the double-counting.

MANY German Jews are now living in fear of the hundreds of thousands of Muslim refugees coming into the country because “they have absorbed anti-Semitism from their mother’s milk”. A spokesman of the Jewish forum for Democracy and against anti-Semitism, Levi Salomon, said Jew-hating Nazi ideology and the hatred of Israel had been at the heart of the ruling Baath parties in both Syria and Iraq for decades.

He warned: “Therefore it must be assumed that the majority of Syrian refugees have absorbed anti-Semitism with their mother’s milk.”

Under the rule of Nazi Germany in the 1930s until the end of World War 2 in 1945, millions of Jews were imprisoned and killed during the Holocaust as part of Adolph Hitler’s “final solution” to ethnically cleanse the country of Jews. Millions of Jews were…

Concentration camps for refugees in Germany?

This video says about iself:

Many Germans are rolling out a cheering, red carpet welcome for refugees that few could doubt is genuine. To the many thousands fleeing war, who wanted more than anywhere to end up here, Germany is returning the compliment, saying ‘we want you, too’.

But there is a political pragmatism in play. Europe’s foremost economy needs capable hands and brains. The unemployment rate is just 6.4%, and the population is ageing, overall. The country will need an immigration top-up for several years to come.

By Martin Kreickenbaum in Germany:

No measure is disreputable enough for the Christian Democratic Union/Christian Social Union (CDU/CSU) parties in Germany when it comes to repelling, intimidating and bullying refugees. “All options are on the table,” CSU state leader Gerda Hasselfeld…