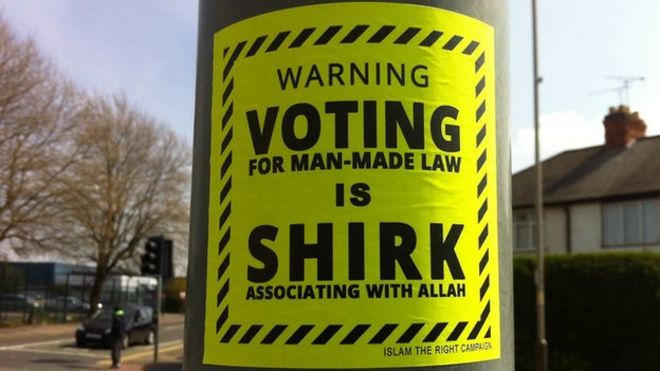 The anti-voting flyers have been posted on streets around Leicester

Flyers claiming voting in the election is anti-Islamic and urging people not to vote have been branded “cowardly” by a prominent imam.

Bright yellow stickers have been posted in areas of Leicester with large Muslim communities saying voting is “shirk”.

Shirk is the sin of worshipping someone other than Allah and is considered the most grievous crime for a Muslim.

Dr Ather Hussain described the signs as “laughable” and suggested it was extremists trying to cause division.

Or is this just a liberal dose of Taqiyya from Dr. Hussain? [The term is derived from the Quranic reference to religious dissimulation in Sura 3:28: ]… A related concept is known as kitman “concealment; dissimulation by omission”. Also related is the concept of ḥiyal, legalistic deception practiced not necessarily in a religious context but to gain political or legalistic advantage.

In this guest post from the International Justice Monitor’s technology for truth series, Dr. Patrick Kroker considers how the ICC might make use of satellite photos as evidence. 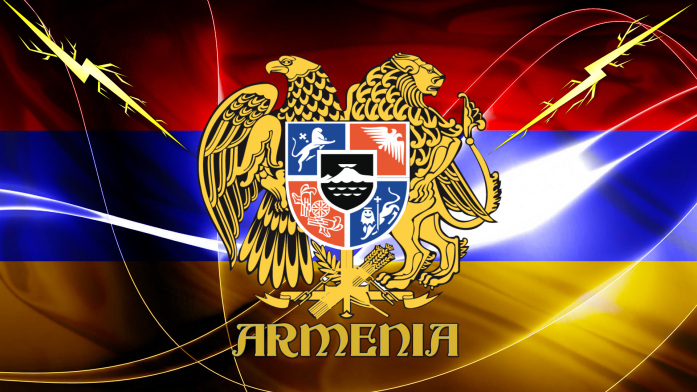 This year, on April 24, the Armenians will mark the 100th anniversary of the Armenian Genocide.

Armenians around the world will be marking the centennial anniversary of the genocide, when the Ottomans killed 1.5 million Armenians during WWI.

The European Parliament also on April 15 urged Turkey to acknowledge its historic responsibility for the massacre of Armenians during World War I, and pave the way for “a genuine reconciliation” with Yerevan.

However, Turkey’s President Recep Tayyip Erdogan said on the same day that, “For Turkey, it will never be possible to recognize such a sin, such a blame.”

The Armenians are an ancient people whose home has been in the southern Caucasus since the 7th century BC. Mongol, Persian, Russian and Ottoman (Turkish) empires have fought on and over this region for many centuries.

European governments are responsible for the Mediterranean death toll

Refugees, Capitalism and the British State

The deaths of at least 1,200 people in the last week, as they attempted to cross the Mediterranean Sea to reach Europe, have caused outrage in the European media, and protestations of concern from political leaders. Yet this scale of death was widely predicted when the EU-Italian operation Mare Nostrum was replaced last November by the Triton operation, run by Frontex, the EU’s border agendy. While Mare Nostrum included a remit for search and rescue in international waters, Triton has a much more limited remit that focuses on border enforcement within EU waters. Under Mare Nostrum, more than 3,400 people are thought to have drowned attempting the crossing in the year to October 2014, and 1,600 have died so far this year.

British government ministers’ active opposition to search and rescue operations has led some commentators, even in the mainstream press, to accuse them of murder. Their justification at…

The EU’s migration challenge [What Think Tanks are thinking]

At a special European Council meeting convened on 23 April after up to 900 migrants drowned in the Mediterranean trying to reach Europe from Africa, EU heads of state and government agreed to increase funding for immigration and asylum policies and strengthen EU presence at sea to prevent further loss of life. The leaders said in a statement that the EU member states would fight trafficking of immigrants and reinforce internal solidarity in tackling the problem.

Think tanks have long urged the bloc to be bolder in tackling the problem. This note offers links to recent commentaries, studies and reports on the topic from major international think tanks and research institutes. Some background material from the European Parliamentary Research Service is available here.

< Previous Next >
+ Add your own event Eventbrite